On Sunday 2nd December 2018, a fish festival was held at a local resort near the source of the River Nile in Jinja. Many people attended the event on which the president. The president of Uganda was expected to preside over the event but was represented by the Minister for Water and Environment.

Although the festival mostly appeared like a normal entertainment event, with local singers appearing to entertain people, it had more to offer. The festival’s theme was “sustainable fishing and culinary tourism”, and the rationale was to educate people about fish and fisheries as they enjoy their favorite fish dishes. For this reason, the organizers and partners included key institutions in the fish industry including the National Fisheries Resources Research Institute (NaFIRRI), the Directorate of Fisheries Resources (DiFR), the Lake Victoria Fisheries Organization (LVFO) and The German Corporation for International Cooperation (GIZ) as a development partner. The following is an account of why fish festivals are important and why everybody should attend or participate in some way.

People have to know more about the variety of fishes in Uganda, where they live and the threats they face. This is important if we are to have more fish to eat now and in the future. For a while, I have been learning about fish as a student and a career research scientist at NaFIRRI studying fish and their environment. I have realized that people have little knowledge of fish and most importantly, where they live and what they need to survive. When people are thinking about fish, they think about few fishes that they encounter on fish market stalls and restaurants. For instance, those from Kampala (Uganda’s capital) mostly use fish to refer to Nile tilapia or Nile perch and even forget the Silver cyprinid (Mukene) that now dominates catches (by weight) in Lake Victoria.  I get disturbed when people (including those in the industry) keep referring to the Nile tilapia, the type of tilapia now common in our fish markets as “tilapia”, obscuring other seven tilapia species extant in the country.  Little knowledge about fish is problematic because it makes many fishes less appreciated, which could be the reason why many fishes and their habitats are of undesirable conservation status. Teaching people about fish makes the fish festivals useful.

As people learn more about fish, they will understand that no fish is an island. Best estimates indicate that Uganda has 500 fish species ranging from Mukene, one of the smallest fishes to the Nile perch that is the biggest fish in the country. Because these fishes need each other to exist, it makes each of these species very important. It is common to hear people asking that for instance, what is the use of haplochromines. Haplochromines, locally known as Nkejje are relatively small fishes, with the biggest I know (Haplochromis gigas) acquiring a maximum length of 14.2 cm. The haplochromines are not preferred on the dinner table and are probably consumed in less privileged households. They may never appear on the menu of any restaurant.  To appreciate the importance of haplochromines, try to imagine the fisheries of Uganda without the Nile perch. Since the 1980s, the Nile perch has been on the forefront of commercial fishing activities, supporting all the lively fishing communities on the lake shores, associated business, and fish processing factories. If all the Nile perch produced in Uganda was exported, coffee that is the coutry’s highest foreign exchange earner would be far behind in terms of foreign exchange earnings. No haplochromines no Nile perch. The haplochromines provide the highest proportion of food for the adult Nile perch (37%) and are the second (13%) to the lake prawn, as the most important food for juvenile Nile perch (Natugonza et al. 2016). Therefore, for the country to have continuous fish supply, Ugandans have to know that behind the fishes they enjoy and appreciate, there are several other fishes, lake prawns, snails, worms and many others things we cannot see with our eyes that are the food or pastures of the big fishes. In future, the fish festival could be organized for people to appreciate all these things. 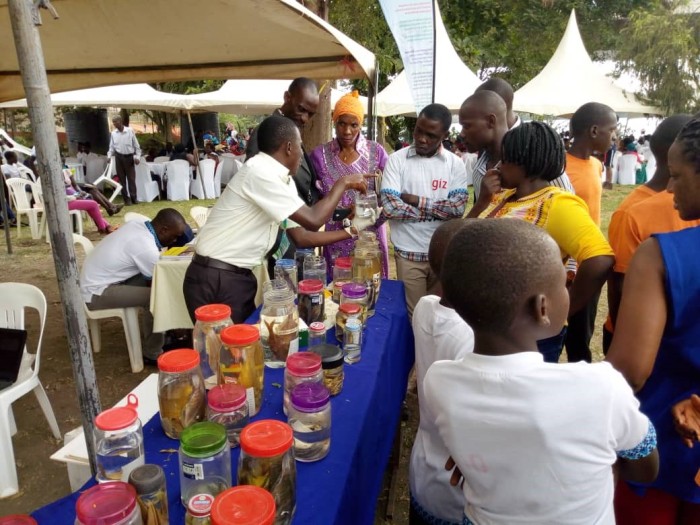 At the fish festival, NaFIRRI as an ultimate source of information on fish and fisheries in Uganda exhibited numerous items including 50 different fish species, and displayed useful information on fisheries such as the shrinkage in size (length) of Mukene since 1974 and confirmed presence of plastics in Nile tilapia.  The festival was used as a way to make people become aware of a variety of fishes in the country, where they can be found and the threats they are facing. With this knowledge, people are expected to appreciate fish, give them the attention they deserve and ultimately start using the environment wisely to conserve them.

As you eat fish, please think widely about it and make sure you catch the next festival or any other chance to learn more about fish and the fisheries they support.

Natogonza et al. 2017. Exploring the structural and functional properties of the Lake Victoriafood web, and the role of fisheries, using a mass balance model. Ecological Modelling 342, 161–174.